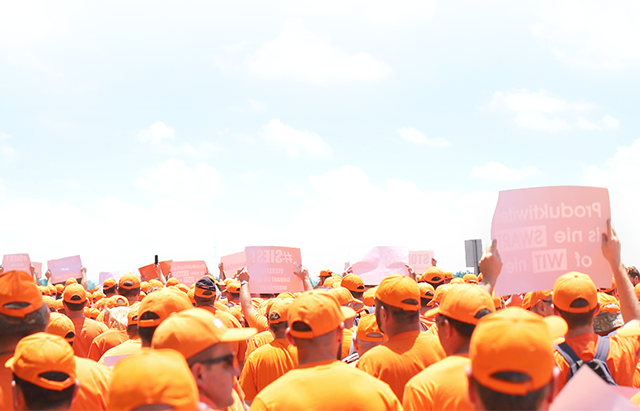 The Solidarity Legal Fund was established with one purpose in mind: To resist the government's wrongful enforcement of affirmative action.

Solidarity's struggle is for the sake of our children. It is necessary to end this unfairness now so that our children may have a future in which they can live a free, safe and prosperous life.

At present Solidarity is contesting 34 affirmative action cases nationwide on behalf of its members and the public, and has won 87% of all lawsuits. Solidarity is continuously working towards protecting the public from the government's obsession with race and race quotas. The government's continued enforcement of race quotas gives rise to the oppression of minority groups and the disregard of skills.

These legal costs cannot be funded entirely from Solidarity membership fees. For this reason the Legal Fund was established and we ask for public support to make this project financially possible.

In every court case another element of affirmative action is put to the test. Therefore, Solidarity's legal strategy is wide-ranging and this is exactly why we should tackle these issues head-on.

If we don't do it, who will? It is your and my responsibility.

The trade union's next big step is to approach the United Nations by submitting a shadow report on affirmative action.

“This is the first time since 1994 that the South African government is charged with racial discrimination. The salient part of the complaint is that the South African government’s absolute focus on racial representation is in contravention of the provisions of CERD. The government's racial policy goes beyond that which is allowed internationally for affirmative action and it no longer fulfils the international requirements of affirmative action.”

All these lawsuits are instituted separately in order to eliminate race quotas. Each one instituted has an influence to ensure that a society that is not racially driven is achieved.

According to the Solidarity charge, the South African government has been contravening the UN convention prohibiting all forms of racial discrimination. The charge focuses on the state’s use of the national racial demography as a quota policy.

The focus is also on the government’s unwillingness to implement court judgments, which have already proved that the state is going too far with racial quotas.

The charge is in the form of a shadow report that is a response to the report the government submitted to the committee on progress made with eliminating racial discrimination.

The convention provides for civil organisations to charge a government by means of a shadow report that is submitted in response to the specific government's own report to the committee.

Support us! All you have to do is SMS the word REG to 34802 and become part of thousands of people who reject racial quotas.

Oops! We could not locate your form.